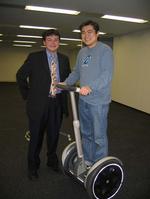 This company called Segway have this great new thing called a Human Transporter that has gyroscopes in it and is fun to scoot around on. Everyone on the block will be really impressed if you’re the first to have one.

Reality is, no one is going to just go to Amazon and fork out the price of a small car for a Segway just to spin around town (well, almost no one). The marketing seems to be totally undirected, but the whole concept seems to be more geared at the young urban professional than anyone else. To my mind, this is exactly the type of people who are least likely to give up driving to work (although I suppose they may buy a Segway, but it will be fun, not because it’s practical.)

So what exactly are Segway and their financiers up to? (The people involved include John Doerr, arguably Silicon Valley’s foremost venture capitalist.) Are they really setting themselves and the world up for a big disappointment, or is there a fantastic, secret plan behind it all?

They’re only pretending that they’re launching the Segway product. It’s just a ruse. They aren’t seriously geared up to sell these things to consumers. They don’t even have a distribution network capable of economically shipping these heavy beasts to customers, training people in and fixing them when they break.

What Segway have actually done is launch the Segway Concept. They want to use the power of the Internet to spread the Concept as far and as wide as they can without having to invest any real marketing dollars. By doing so, they will flush out marketplaces that are really viable for the Segway Concept. Marketplaces which will be prepared to pay out the sort of money that Segway needs to build these units on a small scale.

So why are they doing it this way? Why don’t they just keep their heads down like everyone else who comes up with a sector-specific product? I think the answer runs along the following lines:

– the Segway Concept is very visually appealing, and it’s a great story, every PR man’s dream. It’s so easy to get the word out about this product.

– they aren’t sure which verticals this Concept is going to appeal to. They have some ideas, but until they put it out there, they won’t really be sure.

– they know they have to get their message out outside the US. The Segway Concept will probably be more appealing in Europe and the Far East than it will in the 50 States. The US is so car-centric that a lot of streets there don’t even have pavements that you could run the Segway on.

We won’t be seeing Segway marketing on the High Street any time soon. If they have any sense, they will direct their marketing and sales at a few specific vertical marketplaces, and try to get significant traction (forgive the pun) there before they take on the whole world. That’s why they have this funky little ROI calculator on their website.

Of course, once Segway has made some headway with a few verticals, and has built up some manufacturing scale, they’ll probably start working on the broader consumer markets.

(This view of Segway’s behaviour is based on Jeffrey Moore’s model of technology marketing. Basically, Moore argues that whilst it is quite easy to gain initial success with a technology product amongst technophiles and early adopters, it is very difficult to leap from success with this market to success in the marketplace at large. The solution, Moore suggests, is to concentrate on a few high-value vertical markets before attempting to deal with the mass market. This is covered pretty well in this PDF presentation , entitled “Dynamics of Technology Market Development – see slide 19 in particular.)

Of course, they might not do it this way, in which case they’ll run out of marketing cash before you can say ‘second round of venture capital funding’, or even ‘Palm Pilot’.