It’s interesting to dissect the Eamon Ryan’s article on the need for a new model for housing. Firstly, there is a sense of desperation, that we need to do something different. Secondly, Eamon and the Green Party recognises that social housing as we understand it is not the whole answer. The shortage of housing is not just something that is effecting the least well off. It effects people with pretty good incomes too. And thirdly, it recognises that there is something very broken about our whole housing market. Nothing near enough new accommodation is coming on-stream.

END_OF_DOCUMENT_TOKEN_TO_BE_REPLACED

The reason prices for accommodation inDublin are so high is very simple. here are more or less the same number of homes as there were ten years ago, but there are 10 percent more people. At the same time, the economy has moved from recession to growth. There is just more money around. As a result, prices go up.

The theory of supply and demand is that new demand should now come on-stream in response to the increase in prices. But that hasn’t happened. The reasons for this are many and they need to be addressed. But there are three things that won’t help.

2. Increasing standards, implementing regulations for landlords. There are many good reasons to increase standards and implement new regulations. An example would be a deposit protection scheme. It provides a benefit for tenants, certainly, but it also adds a new cost and a new bureaucratic barrier. In general, regulations make it less attractive to landlords to be in the market. This means that there will be less rental accommodation. (It might result in more property to be available to buy, but that is not much good to you if you need to rent.)

3. Increasing building regulations and planning requirements. Building regulations today are a lot higher than they were 10 years ago. There are sound environmental reasons to increase standards, but ultimately, this means that houses are more expensive to build and take longer to build. Take the case of the iRES development in Rockbrook. This was originally supposed to be 456 homes, but an analyst reckons that this will now be reduced by 40 homes. There will also be a couple of months delay for a new application to be submitted.

Things are pretty bad. Two public servants are moving to Abu Dhabi, so they can afford to buy a home in Dublin. We spend tens of thousands of euros to educate and train people, then they have to go to a tax haven to be able to afford to even live in our country.

We have to provide housing, and quite a lot of it, and fast. We are not building anywhere near enough. The basic problem we face is that when all costs are taken into account, new homes are too expensive to provide without government support. It is cheaper to buy a house (even at high current prices) than to build a house. There are a number of reasons for this and we need to address them for sure.

But we also need to get homes built, starting now. We need to be thinking in terms of hundreds of thousands of new homes over the next few years.

On the sidelines, there is an ideological war going on about house-building. Should the houses be built by the private sector, or by the state? The problem is that nobody at all is building houses at the moment at any scale. It is unaffordable for everybody.

There is one good thing however: the country is awash with young people ready and willing to buy a house, and with a strong economy, many of them are creditworthy and have deposits ready.

Here is what I would do:

Firstly, a straight incentive – €15,000 for every bedroom in a new build completed in accordance with building regulations and occupied by 31 December 2019 in the case of a house and 31 December 2020 in the case of an apartment. (There would also have to be conditions to avoid subsidising houses already underway). The figure would go up to €20,000 where more than 100 units are provided on the same site.

Why €15,000? Well, because for a three-bed semi, that’s enough to cover the shortfall between the price of an existing house and a new house in Dublin. The cost overall for 25,000 homes would be over a billion euros, sure, but all of that would be recovered through VAT and PAYE from the increased economic activity.

Every year after 2019, the amount of the incentive could be reduced if it is no longer required.

Secondly a finance structure is needed. Prospective home purchasers should be encouraged to put down a deposit, now, on their future home. Rather than putting the deposit with the builder, they should place it with a government scheme which would provide a guarantee for the prospective purchaser that their deposit was safe. The government could then loan the value of the deposit to the developer, secured on the land.

The government would also guarantee to purchase the property if the original purchaser ‘fell through’ and didn’t go ahead with the purchase, and if a replacement purchaser couldn’t be found. If it did exercise this option, the government would get a small discount (say 7.5 percent).

But if the economy keeps storming on, that is unlikely to happen. And even if the economy weakens and the government has to buy the houses, the country is still going to need these new homes for the long-term. These will be modern, high-quality houses. The government can rent them for the short term, and rent them later on.

Now the builder has a rock-solid, guaranteed purchaser, rain, hail or shine. With this guarantee, the builder can go to the bank and borrow the money they need to actually build the complex.

This scheme is really designed with private housing built by private developers in mind. But it can work for local authorities too. They can use this funding mechanism to build social housing, or they can use it to build houses for resale.

It can also potentially be used by people who want to buy property to let it, though the structure would need to be tailored to avoid abuse.

Is this the full solution? No. We also need to address the problem of land costs. And to do that, we may ultimately need to replan our transport networks to open up new land. We may need more flexibility in the planning laws. But it provides for immediate action and will mobilise the talent and capital we have available already.

Combined with a plan to utilise vacant housing in the most sought after areas of the country, and perhaps some form of site value tax to incentivise use of vacant or underused land, this would put us well on the way to building hundreds of thousands of homes for our growing population.

The Dublin rental property situation is desperate, with population growing but little being built. Here is a simple first step to provide immediate relief, through a change in the tax code. It could be in place before the end of July if there is the political will.

Despite the crisis, there are reckoned to be 20,000 vacant homes in Dublin alone. If these could be brought onto the rental market, it would make an immediate difference to the housing problem.

UPDATE: latest statistics from CSO for vacant homes in Dublin counties for 2016 are now provided below. There are said to be over 32000 properties vacant. 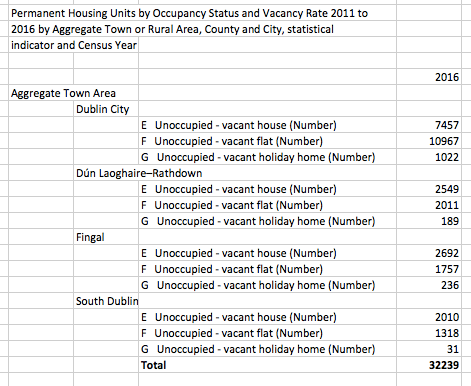 over 32000 vacant houses in Dublin

END_OF_DOCUMENT_TOKEN_TO_BE_REPLACED

There is a somewhat lily-livered leader in the Irish Times today about housing. I say that because it is big on telling us what we must avoid, but it doesn’t face up to what we do in order to avoid it. There are some ‘right-on’ ideas about the government having to play more of a role, but that’s about it.

There is a shortage of houses. Dublin’s population is growing at a pretty fast clip, and has been for decades, through good times and bad. There are 160,000 more people in the county than there were 10 years ago, and yet we have build hardly anything. We could easily absorb 100,000 extra housing units in Dublin.